Why Choosing the Right Guitar Strings Matter for the Best Tone!

Hello fellow gear heads and guitar lovers one and all!

I wanted to write an important piece about great guitar tone. It’s not another pedal made by magic elves, it’s not a super special, much-hyped set of guitar pickups, it’s not the new amp flavor of the month… it’s the most often overlooked aspect of the guitar: Strings. Strings are the conduit that translate what our fingers are trying to do with the instrument. They can elevate your variations of vibrato, they can change how you bend notes, fret chords, and intonate colors of pitch.

Most players just buy the same old replacement set in blind brand loyalty from time to time without giving a second’s thought to what they are actually buying. We even immortalize old stories of old blues guitarists from the turn of the 20th century using old chicken wire, or buying used guitar strings and then boiling them as a way to clean them after they get old and worn because they couldn’t afford new ones. Today strings are made with different materials, made in different gauges of thickness, and made with varying degrees of different construction that can affect the overall comfortability, playability, and tone for guitarists’. I’m here to tell you that strings matter more than you could ever imagine in getting great guitar tone, and if you haven’t given it some thought you should because it’s the most readily available, cheapest way to improve your overall guitar tone. So change your strings regularly and you’ll find you sound better!

The materials chosen for the manufacturing process of guitar strings, as well as the construction process for strings, have a major impact on the flexibility of the string itself. This affects the overall playing experience and guitar tone for the player. Each company has their own “recipe” for the construction process, and even though many companies share similarities in their manufacturing techniques, these “recipes” are why some players prefer brand X vs Y.

At the center of your strings is, no pun intended, what’s called the string core. Cores traditionally are six sided (hexagonally shaped) high carbon steel wire, but there are also round cores. The reason most manufacturers choose to have hexagonally shaped core wire is to give the outer wrapping winding of the material of their choice something to grab on to. Formulas for the number of windings, the tension the winding itself is wound, and the number of wraps in windings are considered trade secrets among manufacturers. These formulas give certain strings their type of sound. String windings directly affect tone and playability. Round wound strings have more “zing” – sustain, responsiveness and bite. Flat wound strings have a smoother and more consistent tone regardless of attack, which makes them a favorite of jazz players, and also the king of cool Jimmie Vaughan.

A guitar string’s flexibility tends to be based on many different factors in the manufacturing process including: the size of the core wire relative to the size of the wrap wire and how tight the wrap wire is wrapped around the string core. Incredibly tightly wrapped strings can sound dull, and incredibly loose wrapped strings can not have enough volume. The alloy material of the wire also helps aid in a set of strings flexibility and the overall strength of the string itself.

Choosing the size of your guitar strings, commonly referred to as string gauges, can help define the voice of your guitar. Guitar strings are measured from the high e string in varying gauges of thickness from .007 all the way to .014, with .007’s being the lightest gauge and .014’s being the heaviest. As you increase the string gauge size you get fatter overall guitar tone because there simply is more mass of string material vibrating on your guitar. But in doing so you are dealing in a tradeoff because the thicker the guitar string the more difficult it can be to fret notes (thicker strings can take more effort to push down with your fretting hand). Most professional players use different gauges on different guitars for whatever style they are going for and constantly consider the balance between ease of technique and overall tone of the instrument from their strings.

Lighter guitar string gauges (.007’s to .009’s) can be very easy to play because there is less material to push down on when playing. This can lead to easier chord fretting, larger bends, and effortless vibrato. Typically, these strings gauges are recommended for those who are occasional hobbyists because they don’t have the endurance for long playing sessions, or those who have extremely light touch when playing the guitar. If you are looking to play much faster, light string gauges can help you build up the speed in your playing because of less resistance from the fretting hand to the picking hand. However, if you have a heavier touch in your fretting hand, using light gauge strings can make your instrument go sharp when playing and you can break strings more frequently.

Heavier string gauges (.011’s to 14’s) can give your guitar much more output because there is simply put more mass to the string. As you increase the mass of a string you get a larger string, and larger strings have more material to vibrate from your guitar playing. The thicker the string, theory you get more sustain, thicker singing quality to the overall tone, and longer life due to the larger string core. Heavy string gauges are also great for players who play in dropped tunings like Drop D or E flat tunings. However, the thicker you go with guitar strings the tighter the overall tension is on the instrument (if you tune down it helps manage the tighter tension), which can make it harder to fret notes and bend. Larger strings can also wear your frets down more because there is more string to wear with friction on the fretboard.

Ultimately, the balancing act comes down to whatever you the player feel comfortable with bending and fretting notes. Yes, do bigger strings give you bigger tone, but you’ll have to build up the strength in your fretting hand to handle them. And if you can’t bend the note you want up to pitch on heavy string gauges… what’s the point??! Hendrix used 10’s which are a great in between gauge and was the absolute best guitarist of all time. So, it’s whatever feels right to you! Just make music! Judge strings on their overall brightness, sustain, tone, and how easily they allow you to bend, pick, and fret notes. 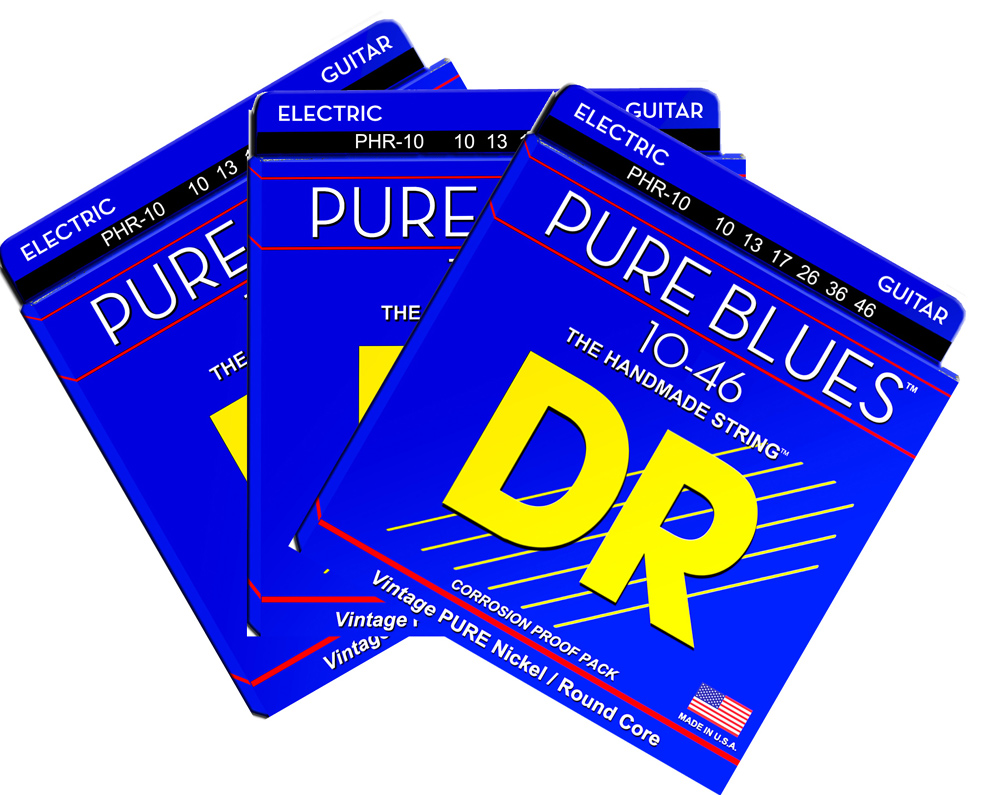 What String Brand I Prefer for the Best Tone!

I get asked all the time: “What guitar strings do you use? You seem to have more sustain than me, more brightness, more low end, more clarity, you sound like the record, how are you doing this?” I usually don’t share my trade secrets, but in the service of helping you dear reader achieve righteous guitar tones I will delve into my personal tone book of gospel. I have used DR Pure Blues since 2009, and will forever use them as long as I live. Strong words to live by, but I sincerely believe that DR Pure Blues are the best guitar string on the market today. They are pure nickel wrapped strings that are wrapped around a round core. This is the OLD SCHOOL way of making guitar strings and it isn’t the least expensive method, but it simply creates a better string that delivers on better guitar tone. They have much more low-end clarity and thump than other brands, and also have much more sustain which is integral to bending and soloing on the electric guitar. They are made in the U.S. with the finest materials. Most importantly, once I made the switch I stopped feeling like I was trying to play guitar, and just was able to play effortlessly. I also stopped breaking guitar strings when I do large bends, which I did on a bi-weekly basis previously. They work for a wide range of styles which is evidenced in their endorsement roster which includes Derek Trucks, Victor Wooten, Gerard Butler from Black Sabbath, and Melissa Etheridge.

Pick a set up. You won’t be disappointed.

Tips for Faking Other Sounds with a Guitar!

Speakers: The Last Bastion of Tone